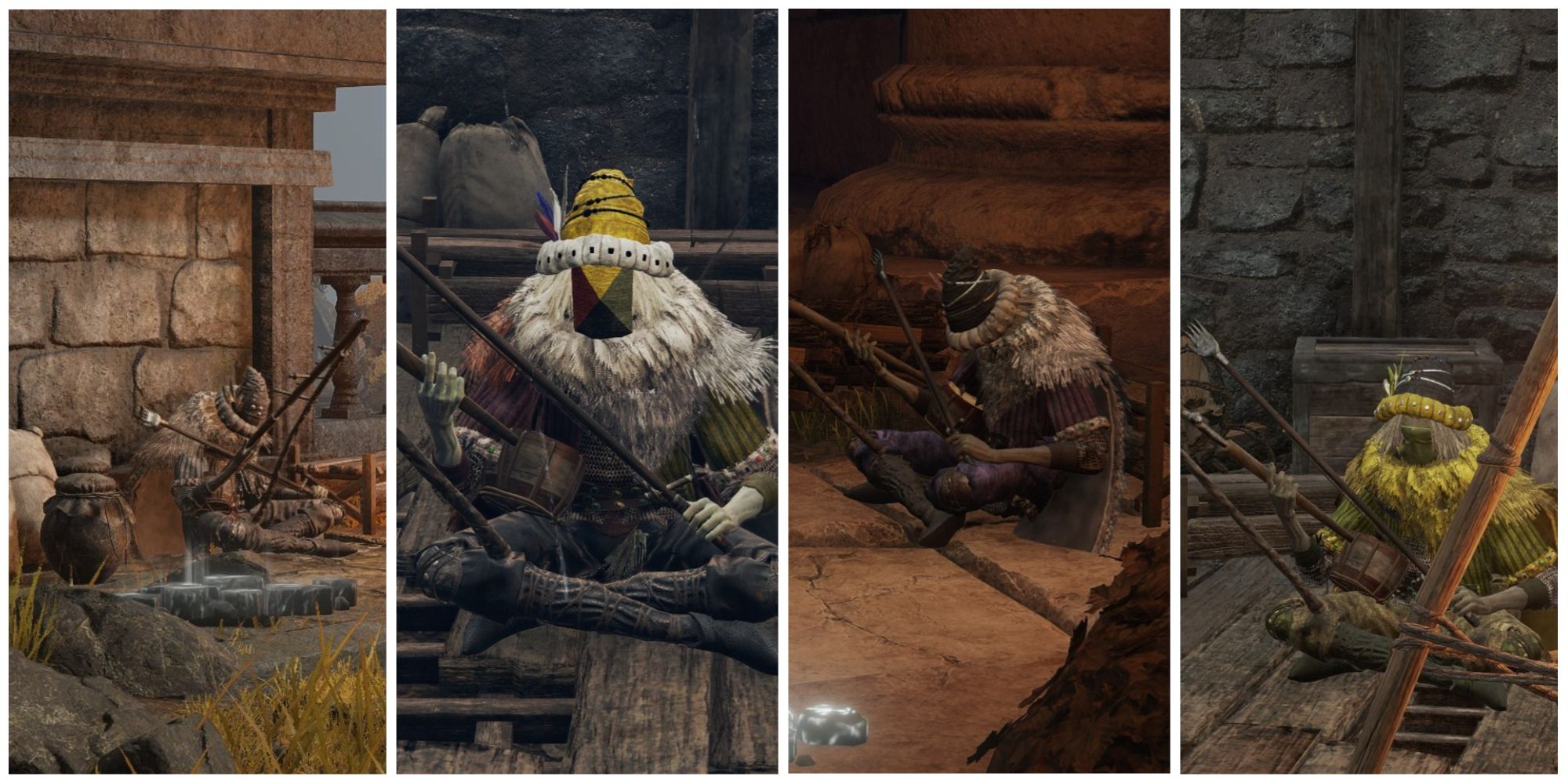 Isolated, mysterious, and with a whole tragic backstory, the wandering merchants of Elden Ring are some of the last of their culture. Scattered across the Lands Between, they still ply their trade to the few people that manage to stumble across their camps.

While their way of life might not be what it once was, the merchants you find will sometimes have items that come in extremely useful. It may be equipment, recipes, or strange, unique objects. Whatever it is, it’s worth paying them a visit and parting with some coin. You can return the favour by not murdering them for their bell bearings.

Not one that is likely to take too much searching for, Merchant Kalé can be found almost immediately after entering Limgrave, camped out in the Church of Elleh. Kalé is a helpful fellow, who sells the Crafting Kit amongst other things. This functional pack will get you started in the world of item crafting, and you can get the first three cookbooks from Kalé too.

As well as the Crafting Kit, he also sells the Telescope, which allows you to take a look at faraway objects. It’s very useful for seeing what’s waiting to kill you next.

One of the few merchants who has gone out of his way to advertise, you can see a message beckoning you up to his camp beside the main road through Limgrave’s Mistwood. In a surprising turn of events for a FromSoftware game, this turns out to not be a trap of any kind, and the man does just really want to sell you items.

He has a couple of recipes on his person, including Armorer’s Cookbook [3]. This lets you craft Exalted Flesh, to grant a 20 percent damage buff for 30 seconds. He also sells the Blue-Gold Kite Shield, which is a great early game shield if your class’ starting shield is not cutting it, thanks to its 100 percent physical block.

As the name might suggest, you can find this fellow camped up against the outer walls of Castle Morne on the Weeping Peninsula. This site should probably be approached with a healthy amount of caution depending on the time of day. After dark, you’re likely to find a Night’s Cavalry boss prowling around very close by.

As for the merchant himself, his notable items include an unlimited supply of the Kukri, a throwing weapon which causes bleed buildup. These are great for dealing with tough enemies early on in a playthrough. Also in stock here is the Crimson Amber Medallion, a talisman which will give you a boost to your HP.

This vendor sits out in a tumbledown shack at the lonely edge of the Weeping Peninsula, not far from the Witchbane Ruins. There is a Walking Mausoleum in the vicinity that’s fairly hard to miss on your initial approach.

While he’s out of the way, this guy is more than worth the trip. Here you can buy the Zweihander, the lightest colossal sword class weapon. This is a solid choice for anyone wanting a bigger sword early on, and keeps a versatile moveset. Even better, you can pick up the Lantern here. It gives out light like the Torch, but instead clips onto your belt and doesn’t require a free hand to use — making dark areas nothing to worry about anymore.

Abandoned might be a good term for this individual. He does not make it easy for customers to find him. To locate the merchant you’ll need to climb some wooden scaffolding south of the Worshipper’s Woods Grace in Siofra River, drop onto a platform below, follow the path and walk under a waterfall to drop into his hiding place. He seems a little surprised to see you.

Amongst his stock he has a Larval Tear, a rare item that will allow you to undergo rebirth from the defeated Rennala and respec your character. Keep in mind it’s a one-time use, so don’t waste it!

Camped out in the perpetual downpour of Dragonbarrow, this fellow has a few useful items. The Spiked Caestus is a handy fist weapon, and Serpent Arrows can be used to poison difficult enemies from a safe distance. Aside from this, one item on his person has a very interesting effect.

The Beast Repellent Torch is exactly what you need if you’re sick of being stunlocked to death by the dogs of Elden Ring. Holding the torch up around creatures like dogs, wolves, and even the dreaded basilisks, will make them think twice before attacking you. Getting too close can still get you bitten, but as long as you leave them alone, they’ll leave you alone.

Sat up on the edge of the broken greatbridge along the Altus Highway, this merchant can be found playing a lovely tune. If you can bring yourself to stop his music, he can also sell you some useful stuff.

One notable piece is the Ancient Dragon Apostle’s Cookbook [2], which will add Lightning Pots to your crafting repertoire. Another handy item for Strength builds is the Crossed-Tree Towershield, which is a good solid greatshield with a decent resistance to holy damage. This can be very helpful when you start running into Gods.

This one is a bit of a hike. That is to say, he’s camped nearly right at the top of Mount Gelmir. You can find him across two stone spires, and up two long ladders from the Primeval Sorcerer Azur Grace. How he got his donkey up there, it’s best not to speculate. You’re more likely to be exploring, or up there with another purpose, rather than going to find this vendor specifically, but if you like things that explode, he is your guy.

In his stock he has the Nomadic Warrior’s Cookbook [20], which lets you craft the extremely incendiary Volcano Pots. He will also stock Explosive Bolts and Explosive Greatbolts, which you can choose between depending on your weapon or how intensely you dislike whatever you’re aiming at.

Sat just within the shadows of the capital’s outer walls, this merchant has numerous wares that might tempt you, if you don’t mind fighting your way through some skeletons to get there. Helpfully enough, he has an unlimited stock of Golden Arrows, which will send skeletons back to the grave easily.

You can get hold of one of the rare perfume bottles here. In addition, you can pick up the Sentry’s Torch from him. This torch has the effect of revealing cloaked enemies, like invisible assassins, and letting you lock on to them. This can be, quite literally, a lifesaver.

A few merchants don’t necessarily make it easy to shop with them. This merchant is found deep within the underground area of Ainsel River, accessible through a tunnel in Liurnia. He’s camped inside a large building in the Uhl Palace Ruins, which sits under a huge hanging enemy that spits rocks at you as you head inside. At least once you get in you’re relatively safe.

Here you can get hold of some Celestial Dew, a rare item that can be used at the Church of Vows in Liurnia to make amends with any NPCs you’ve made hostile. This is invaluable if you’ve accidentally upset somebody! 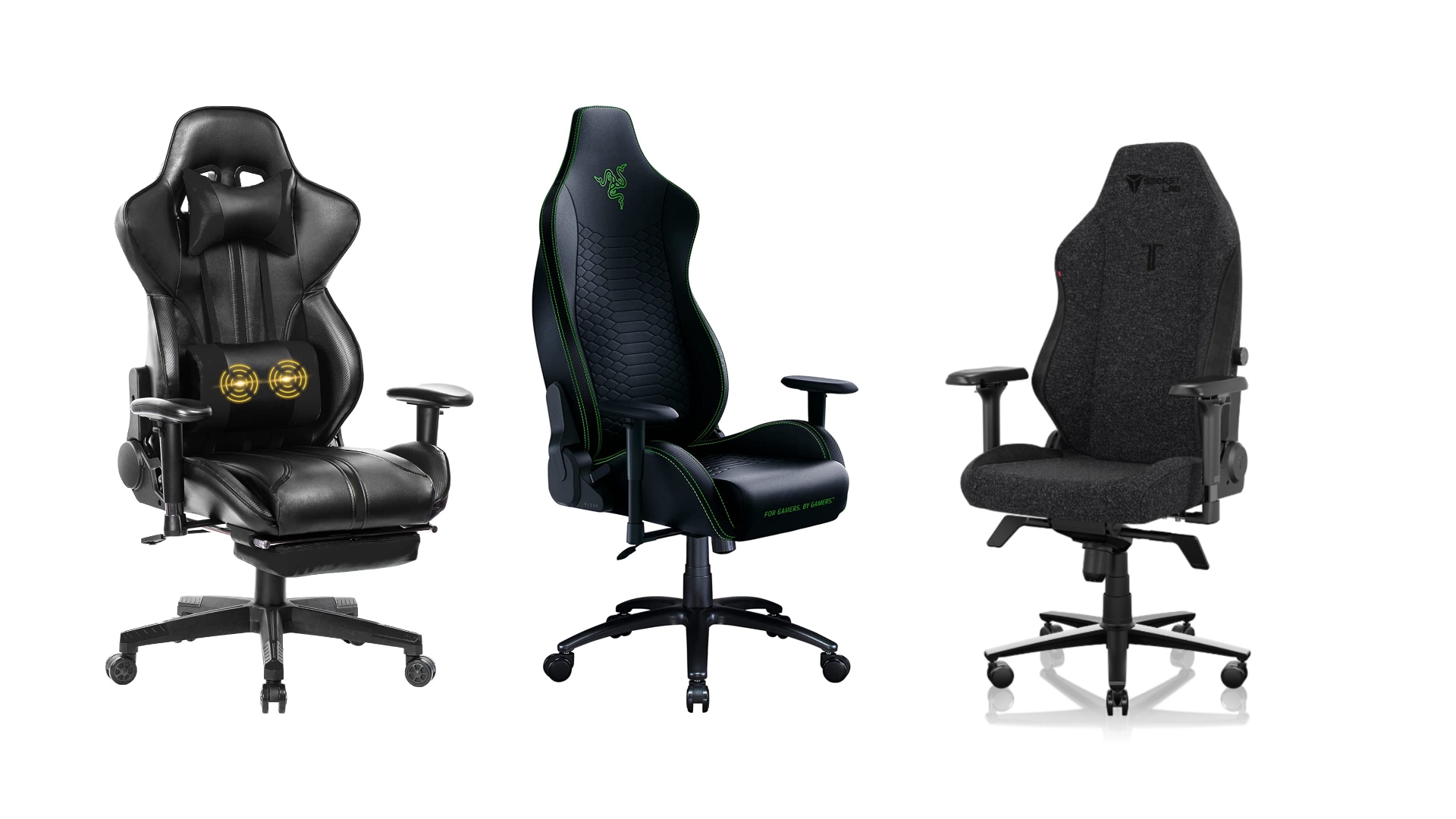 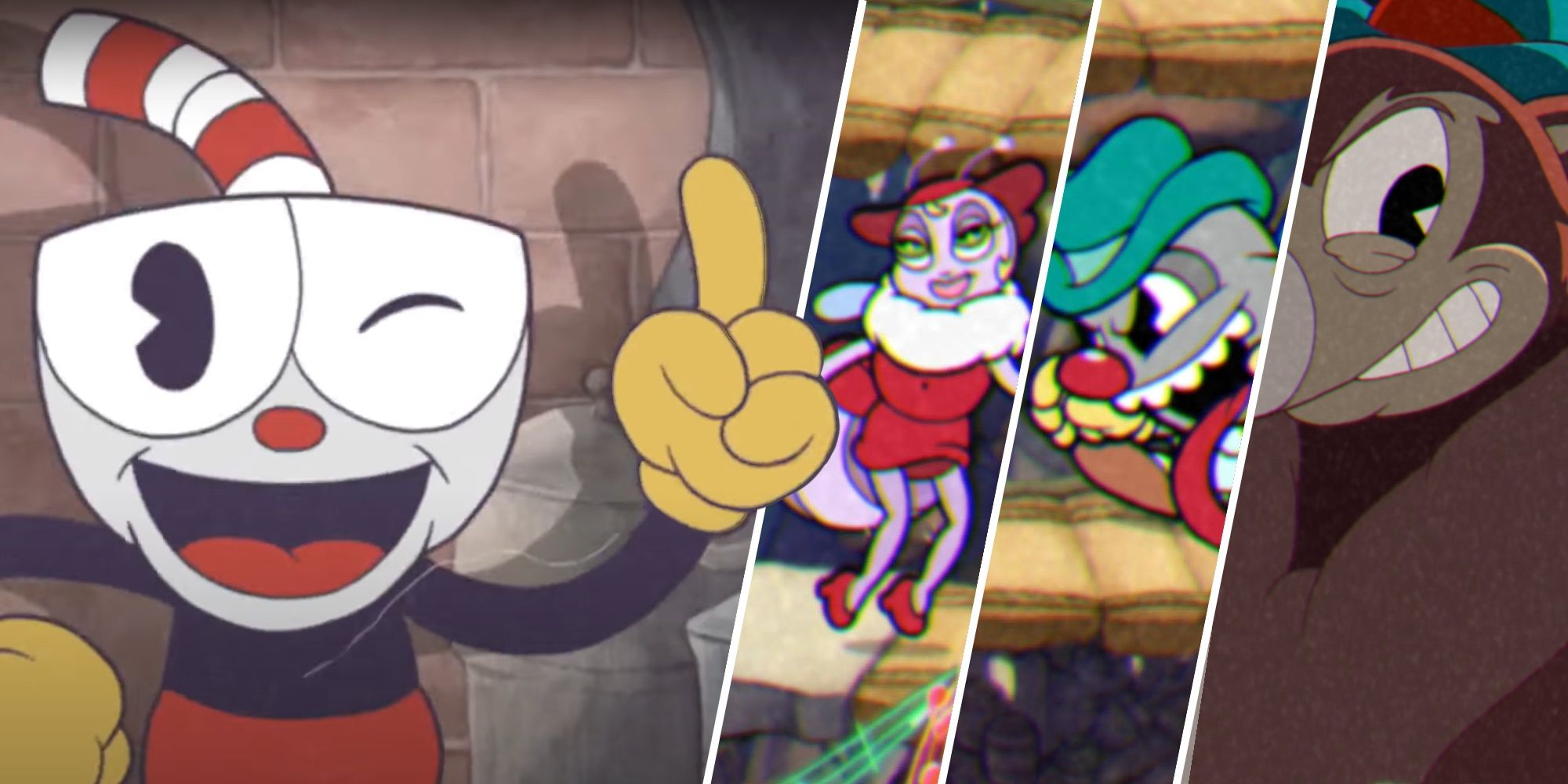 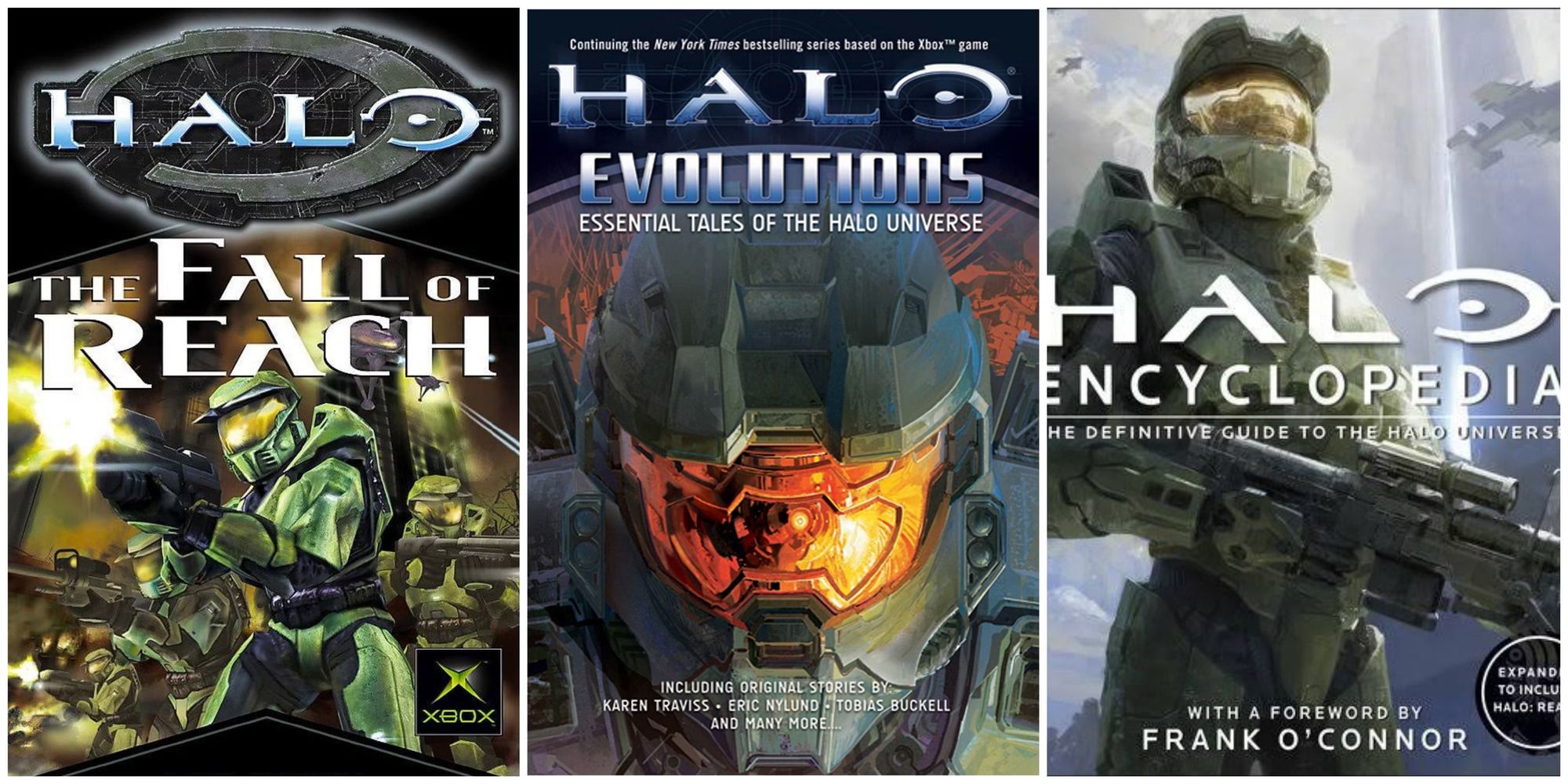