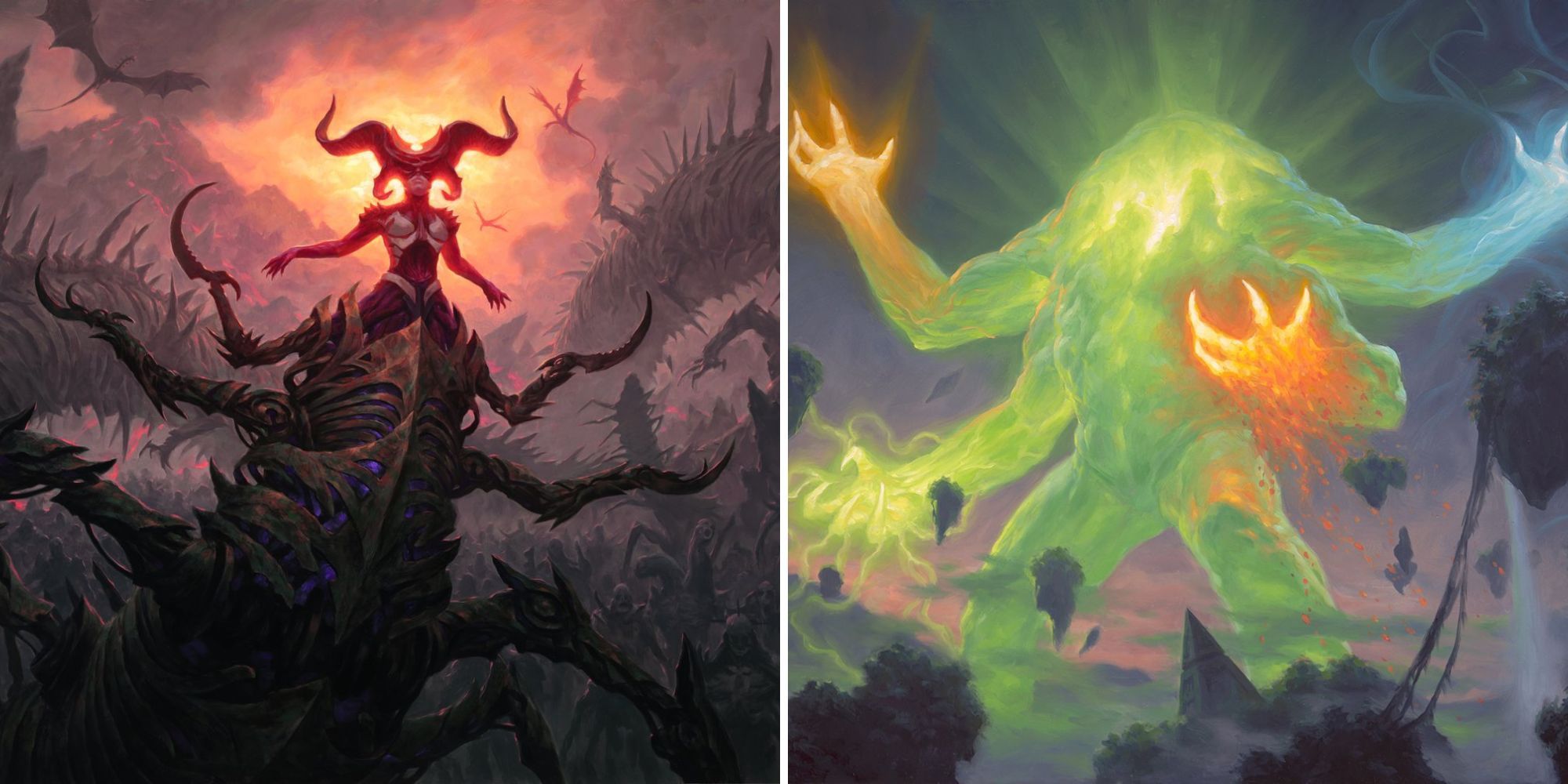 Considering Magic: The Gathering’s super-frequent release schedule this past year, it feels like 2022 really just flew right by. As we near the end of the year, it’s time to take a look at some of the most prominent decks to break through the metagame in 2022.

RELATED: Magic: The Gathering – The Most Valuable Cards In The Brothers’ War

It’s worth noting that 2022 wasn’t without bumps in the road, with both Meathook Massacre in Standard and Yorion, Sky Nomad in Modern both banned. Other than that though, it has been a relatively good year for Magic, and the deck lists we’re about to examine demonstrate as much. Versions of Indomitable Creativity in both Standard and Modern also receive honorable mentions.

Prior to rotation sending this deck packing, Mono-Green Aggro was arguably the premier aggro deck in Standard for the first half of the year. The combination and curve of value threats including Ascendant Packleader, Werewolf Pack Leader, Old-Growth Troll, and Esika’s Chariot made for a windmill slam deck that pumped out more threats than most opponents knew how to handle.

Additionally, Blizzard Brawl, Snakeskin Veil, Jewel Thief, and Sculptor of Winter all provided ridiculous mana advantages for their respective costs, allowing Mono-Green to heavily leverage the power of its curve. It’s also difficult to forget the usefulness of Ranger Class in longer games, as well as the combat advantage the enchantment often provided thanks to the counters it distributed. It’s unlikely we’ll be seeing the likes of Mono-Green Aggro again anytime soon, but the existence of Tail Swipe in current Standard does get the brewer’s brain going.

While Mono-Green Aggro is a deck that’s already been lost to time, Mono-White Aggro has performed all year and continues to put up results in Standard to this day. It’s not often that decks at the top of the metagame are capable of surviving rotation, but Mono-White Aggro has proven itself this year to be an archetype that may just hang around for quite a while. Earlier in the year, threats included the following cards: Luminarch Aspirant; Reidane, God of the Worthy; Elite Spellbinder; and Legion Angel. These made for a taxing curve that delayed opponent plays long enough to finish the game early.

While all of these threats have since rotated, they’ve been replaced with new additions: Guardian of New Benalia; Thalia, Guardian of Thraben; Anointed Peacekeeper; and Serra Paragon. Taking a closer look at these cards, they play extremely similarly to one another, which has allowed the archetype to continue putting up results in high mythic of the Arena ladder. The sheer power of The Wandering Emperor is also something to consider as far as the continued success of this archetype goes, but who doesn’t like a busted planeswalker?

Jeskai Hinata remained the premier control deck in Standard for quite a while after Jan Merkel’s victory with it in the Streets of New Capenna Championship. This was a combo deck that took advantage of the spell discount text on Hinata, Dawn-Crowned through the use of Magma Opus: a huge spell that can choose as many targets as you like. The resulting combo allowed you to sling Magma Opus for a severely discounted cost of one red and one blue mana in the most ideal of situations.

RELATED: Magic: The Gathering – The Most Underrated Planeswalker Cards

Needless to say, it’s not difficult to understand why this combo was so powerful. However, it was the presence of supporting cards Goldspan Dragon, Fable of the Mirror-Breaker, and Expressive Iteration that really made this deck sing. The result was a combo deck that didn’t need to go off in order to secure victory. It was just a near-surefire win when it did. Oftentimes, these are the best kind of combo decks you can build.

Does anyone else see a theme of Mono-colored decks developing here? Mono-Black saw — and continues to see — success across two different builds, though the two archetypes were so similar that we might as well pair them together. Both decks made use of efficient value creatures including Evolved Sleeper, Tenacious Underdog, Graveyard Trespasser, and, of course, Sheoldred, the Apocalypse. In fact, it’s probably worth saying here that the introduction of Sheoldred to the format with the release of Dominaria is what really sent these archetypes over the top.

Despite how ridiculously busted Sheoldred, the Apocalypse might be, the sorcery Invoke Despair is the card that’s truly to thank for the success of both of these archetypes. The combination of life loss, card advantage, and sacrifice effects stapled to Invoke Despair make it nearly impossible to play against. If your opponent draws multiple copies of Invoke Despair, you might as well scoop them up and move on to the next match. Players still interested in this archetype will likely find more success with the Aggro build at the moment thanks to the release of the following: Misery’s Shadow; Gix, Yawgmoth Praetor; Phyrexian Fleshgorger; and Go for the Throat.

First popularized as Grixis Vampires to the chagrin of the deck’s developers, Team ChannelFireball showed up to the Streets of New Capenna Championship with a vengeance when all of their members played very similar versions of the same Grixis list. Team member Mike Sigrist would end up taking his version of the deck to the top eight, earning a respectable fourth-place finish.

RELATED: Magic: The Gathering – The Best Art From The Brothers’ War

The original deck was really just a heap of value cards piled together that happened to feature a handful of Vampires. Cards like Bloodtithe Harvester, Fable of the Mirror-Breaker, Corpse Appraiser, and Evelyn, the Covetous provided repeated two-for-one trades that would eventually bury opponents in card advantage. Nowadays, the deck has some notable upgrades, which led Nathan Steuer to pilot his version to victory at the World Championship XXVIII earlier this year. Powerful top-end threats including Sheoldred, Bladecoil Serpent, and Invoke Despair combined to place relative newcomer Steuer at the top of the competitive Magic scene.

Before the Yorion, Sky Nomad ban in Modern earlier this year, four or five-color Omnath decks were absolutely obliterating the format. The fact that these decks remain at the top of the metagame after Yorion got the axe is a testament to the sheer strength of this archetype.

Traditional control players shouldn’t look any further than one of these builds if they’re interested in breaking into Modern. However, the price point of these decks does prove a problem, with the total cost of the deck coming in at around $1,500. That being said, this is a very fun deck to play, with a nearly unmatched number of decision points for pilots to navigate thanks to the use of counterspells, the inclusion of five colors, and the presence of over ten planeswalkers.

An old-time Modern favorite archetype has finally (and recently) returned thanks to the printing of the new Merfolk lord Vodalian Hexcatcher in Dominaria United. The return of this tribal favorite has also resurrected the beloved artifact, Aether Vial. This had been used alongside tribal deck builds for years, before the release of Modern Horizons 2 decimated tribal decks across the Modern meta.

Players who aren’t familiar with Merfolk will soon learn that this is a very annoying deck to play against if they haven’t already. Merfolk is a Tempo deck that suppresses what its opponent is trying to achieve using cards like Spreading Seas, Tide Shaper, and Dismember, all while swinging in with a growing army of Merfolk that provides reliable kills by turn five or six. The current iteration of the deck now features a total of twelve lords. If tribal is your jam, it’s time you took a dip into Modern with Magic’s favorite fishy creature type. 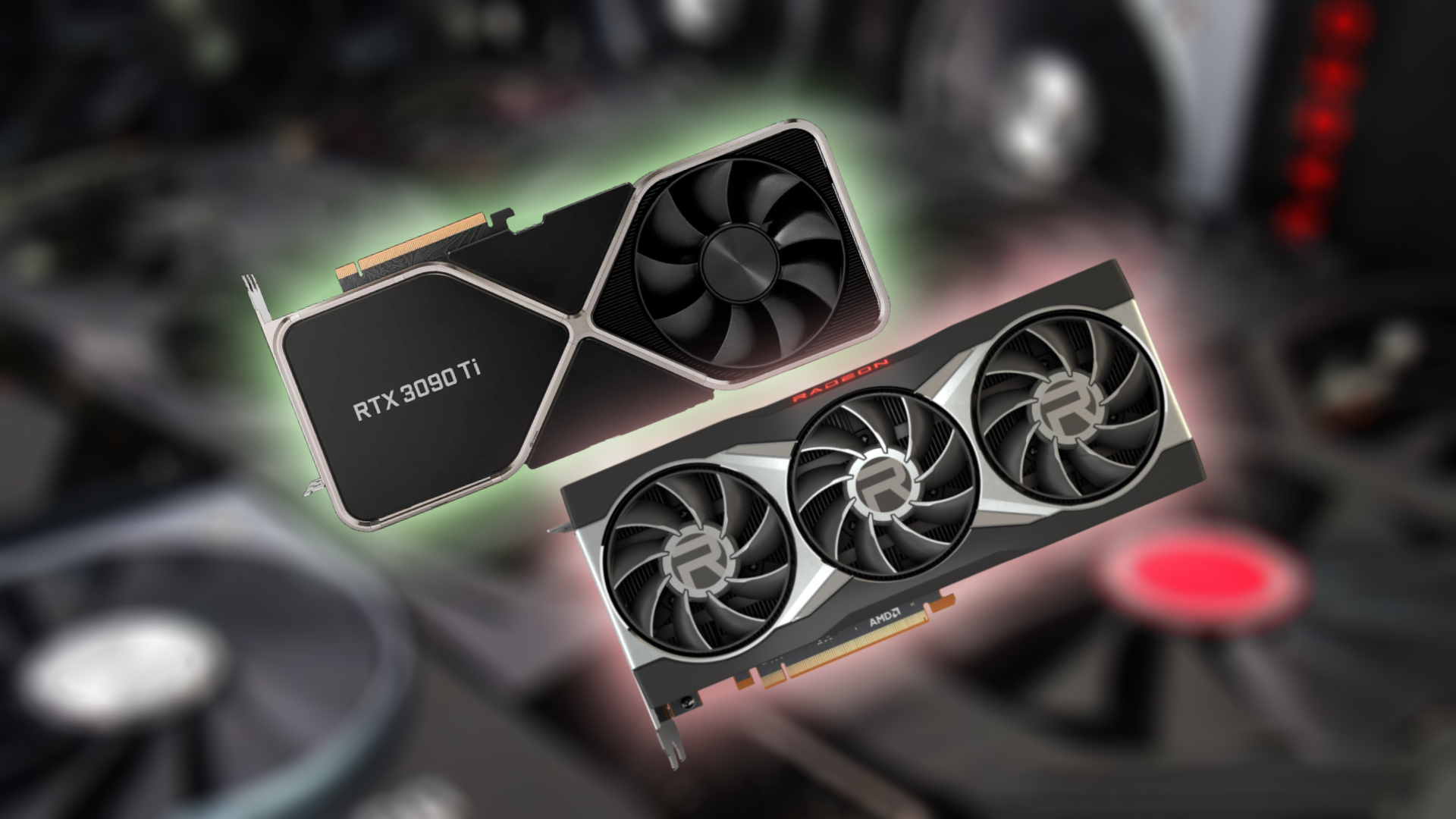 Choosing the best graphics card can enhance your gaming PC tenfold, enabling you to enjoy lofty resolutions and frame rates. While GeForce RTX 4000 and Radeon RX 7000 GPUs will soon.... 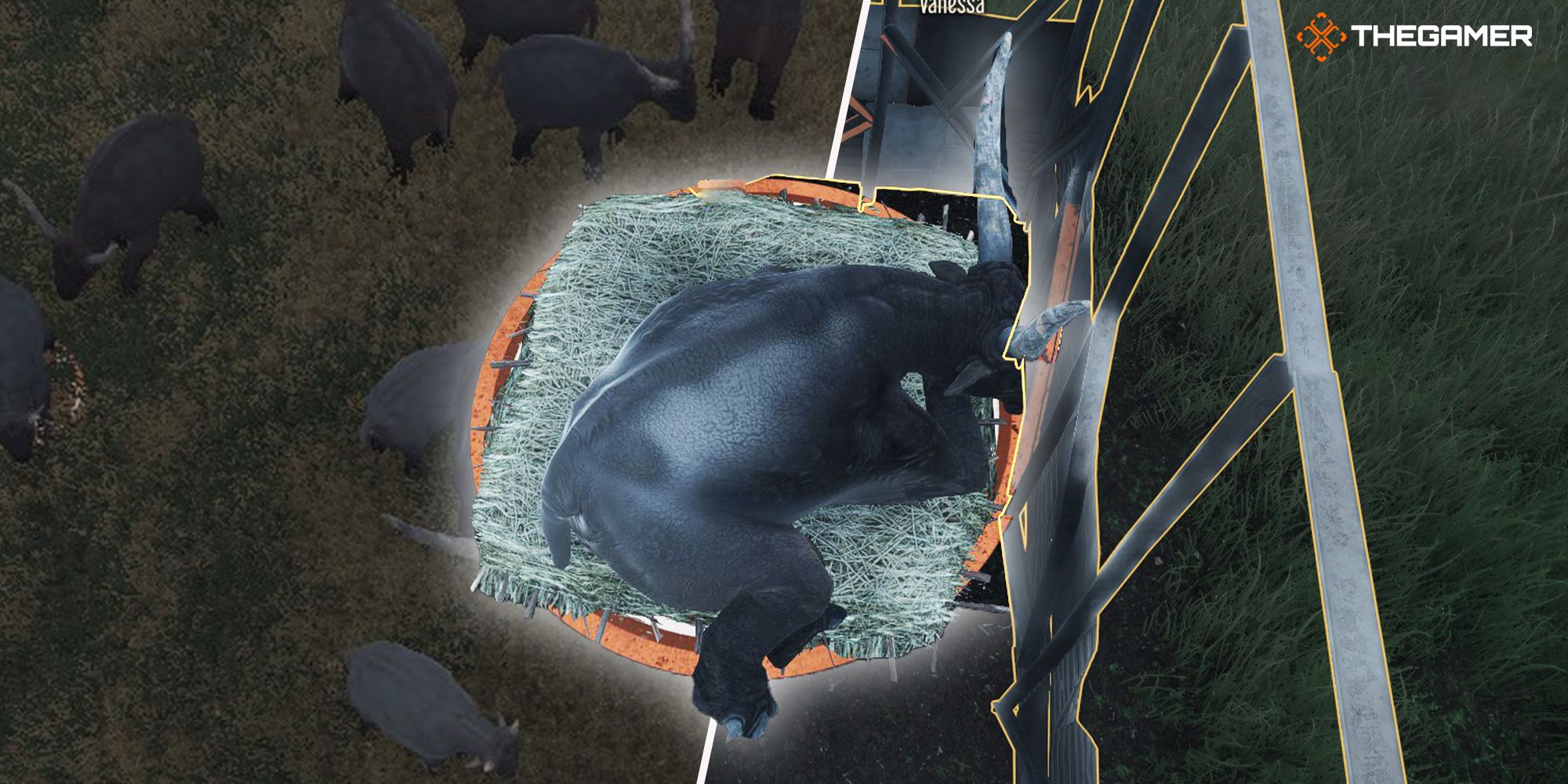 Stranded: Alien Dawn’s latest expansion, “Train And Tame,” adds a much-needed feature to deepen the survival experience: domesticated animals. Now you can tame animals, breed them to get slaughtered, house them.... 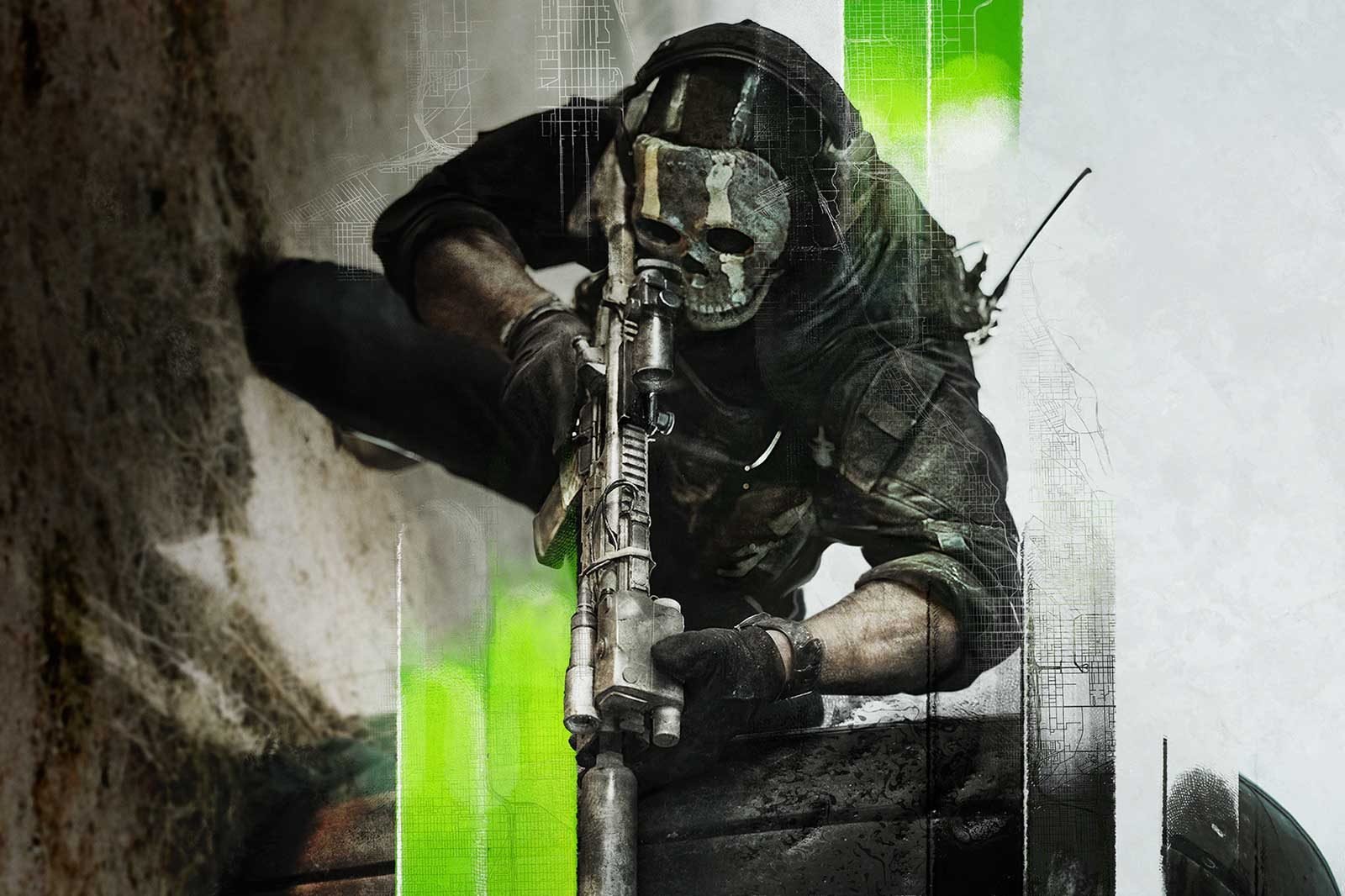 In this guide, you will find out how to fix Modern Warfare 2 Beta Crashing & Not Launching on PC. You have to follow the steps below to fix the error.....