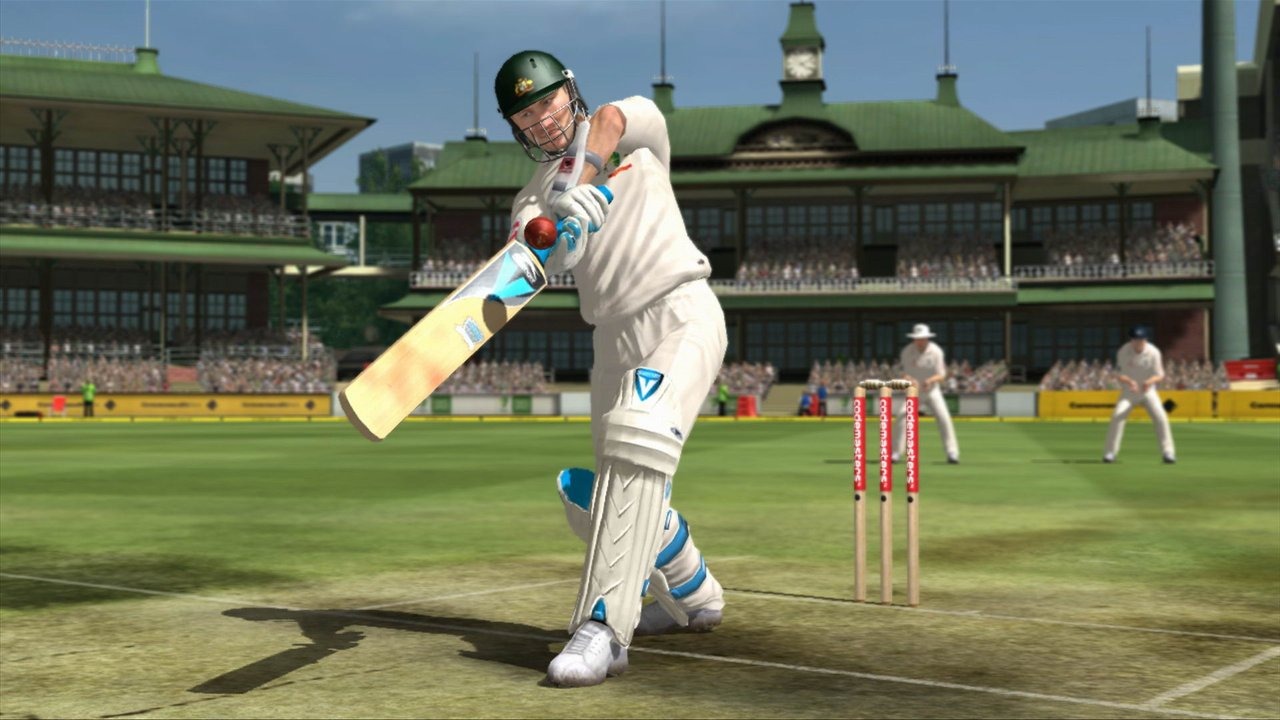 As England and Australia currently battle it out in the Ashes series overseas, cricket fans will soon be able to step up to the crease with Ashes Cricket 2009. Cricket games definitely are few and far between (in fact if memory serves me right, the last one we saw was back in 2007). This time Codemasters have teamed up with Transmission Games once again and updated their successful Ricky Ponting / Brian Lara franchise.

As the name suggests, the game includes fully licensed versions of the English and Australian international cricket teams, each complete with a 23 man-squad of recognisable faces. However Ashes Cricket 2009 also includes other cricketing nations with New Zealand, India, Pakistan, South Africa, Ireland, Sri Lanka, West Indies, Zimbabwe, Bangladesh, Kenya and Ireland. The game also includes a selection of “all-star” type teams and the ability to customise your own squad of players with a team editor.

When you first start the game, you get to select your preferred country that allocates you a matching theme and your default starting team. For example South Africa gives you a green and yellow menu setup, or New Zealand gives you black and grey visuals. For my first game, I thought a one-day international match of NZ vs. Australia would be perfect for a nail-biting, rivalry driven encounter. After winning the toss, I decided to bowl / field first… but it soon dawned on me that I had no idea what I was doing. After various no-balls, dropped catches and getting smacked around the field for 14 in one over, I decided that the tutorial should be my first port of call.

This certainly isn’t a fault in the game though. Quite the opposite, purely because the amount of detail in Ashes Cricket 2009 truly is outstanding. Players will need to take in a huge amount of information to master the controls, but once perfected the experience will run on instincts. The tutorials are well categorised and will let you pick up all of the techniques from bowling, batting and fielding one by one. After around 30 minutes of running through them, I was ready to enter the MCG again to give those Aussies a better run for their money.

When fielding, you have control over your team’s positioning including the out-field, slip cover and so forth. However, each fielder “formation” is set up according to your bowler and his choice of bowling style. For example, selecting a slower spin bowler might cause your out-field to come in, crowding the batsman ready for a dodgy edge. When bowling, you will have control over the pace, aim and style of ball you deliver. Using the face buttons of A, B, X and Y you can assign leg-spin or an in-swing delivery and so on depending on your bowler’s preference. Once selected, you have a limited amount of time to position where you want the ball to land using the analogue stick and assign some extra spin using the left or right triggers. Pressing the button a second time determines the quality of the delivery – press it too early and it will be off-pace or leave it too long and it will end up being a no-ball. This timing is made easier thanks to a meter bar that appears but there is a lot to remember when pitching that perfect ball. However, with practice, players will pick up the controls and it shouldn’t be long until it seems like second nature.

Fielding on the other hand is an extremely frustrating experience. For most of the time, your fielders will run around after the ball automatically and your only main concern is choosing which end to throw the ball back for a potential run-out. But if you’re lucky enough to have a fielder in the right position to catch the ball, be prepared for many butter-finger moments. When this happens, the camera angle switches to behind the fielder and the ball is highlighted by a red coloured ring. As the ball soars towards you, the ring will change from orange to green and only by pressing the A button at the exact right moment results in a successful catch. It’s a great effect if you pull it off but if the ball is hurtling towards you at 80km/ph you seldom have enough time to even register that a catch is possible. Truthfully though, there is little more that could be done to mimic the fielding aspect of the game without simply automating everything. I found that the best technique was to wait until the ring was orange and then simply hold down the A button. And then hold your breath.

Batting is a similar affair in the control department. Each face button assigns the type of shot that you want to play of either a defensive block, a loft shot or an attacking drive. The direction you intend the shot to go is determined by the analogue stick and players can even select to play the shot on the back or the front foot. All of this has to be decided in a matter of seconds though, after seeing what type of ball will be delivered to you. An indicator showing the ball’s pitch helps you decide, but a lot of it is actually knowing who is bowling the ball to you and what their style is. After a successful shot, the next thing you need to worry about is running. Pressing Y will initiate a run and pressing it again will queue up additional runs after it. For example, if you’re feeling daring for three runs, pressing Y three times will set them off. Pressing B at any stage will send them back to the closest crease and then pressing A will make them dive in case of a run-out.

As you should see from the above, Ashes Cricket 2009 is a very worthy take on the sport and combines a good level of detail with an intuitive control system. This attention to detail carries right across to the visuals as well. As previously mentioned the players are fairly distinguishable by their appearance and although the animations aren’t perfect (sometimes the sudden shift in a fielder’s position to take a reflex catch can look awkward) the overall result is a pleasant-looking experience. Another nice touch are the TV-like graphics that pop-up every now and then, showing LBW simulations, shot placements, boundaries and sideways replays of the ball being delivered. Your batsmen will react to nasty deliveries too, with a ball to the ribs being received with a wince of pain and brief break for him to recover. Umpires will take their time, making close calls resulting in anxious close-ups of the umpire’s decision. If the call is too close for them to make, they will call up the third umpire, letting you see those run-outs in slow-motion. The only annoying thing is the umpire will call a third-umpire even if it’s obvious to the naked eye that they were safe. Luckily in-between animations and replays can be quickly skipped at most times with the press of the button to speed up game time.

The audio definitely deserves a mention as well and includes a non-obtrusive and intelligent commentary track. Each match you partake in will be called by a posh-sounding British chap accompanied by a guest commentator depending on who is playing. For example if Australia are playing you will be greeted by the cutting Aussie accent of Shane Warne. Thankfully though, the commentators always have something worthwhile to say and can fill you in on ground conditions, weather variables and finer points on the pitch.

Ashes Cricket 2009 includes plenty of game types to occupy your time outside of the traditional Ashes tournament. You can select One Day Internationals, Test Matches and the fairly new 20 Over matches each one with a variety of options to suit including difficulty, match length (5 – 50 overs) and more. All of these modes can also be played online as well, giving way to International leaderboards and rankings to really push your patriotic skills to the test. An average 5-over ODI takes around 30 minutes to play through, so players don’t need to worry about nesting down for four hours every time they want to play. However, these long competitions are certainly available if the player wishes. Having not played cricket since I was little (back in 1994), Ashes Cricket 2009 was a surprisingly enjoyable experience. Not even really being a huge fan of cricket, it managed to hold my interest for a long time and compelled me to want to learn more of the finer controls to master my techniques. Cricket fans all over the country should at least try this game out, as it could be a long while before another title like this comes along for the sport. 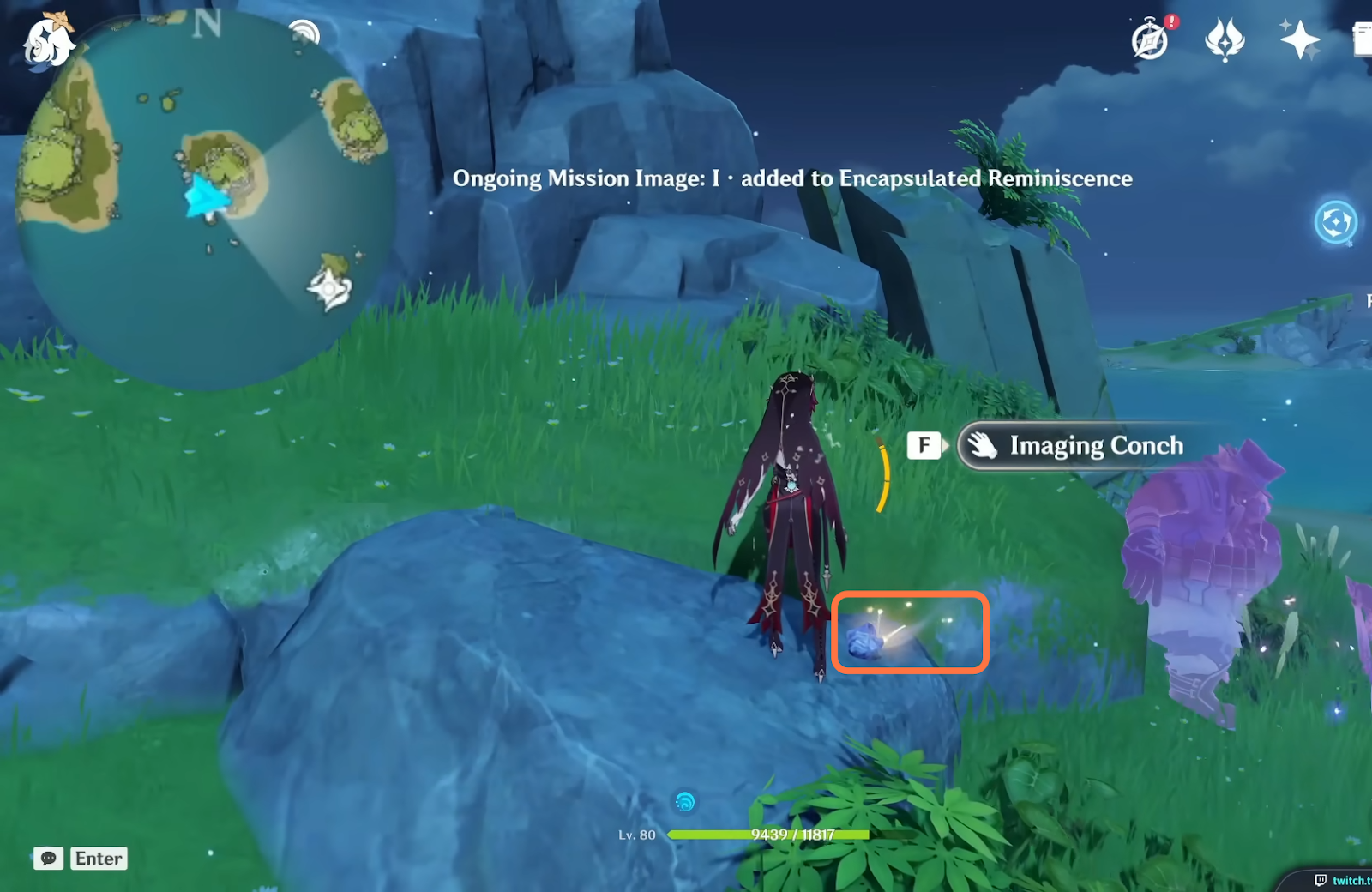 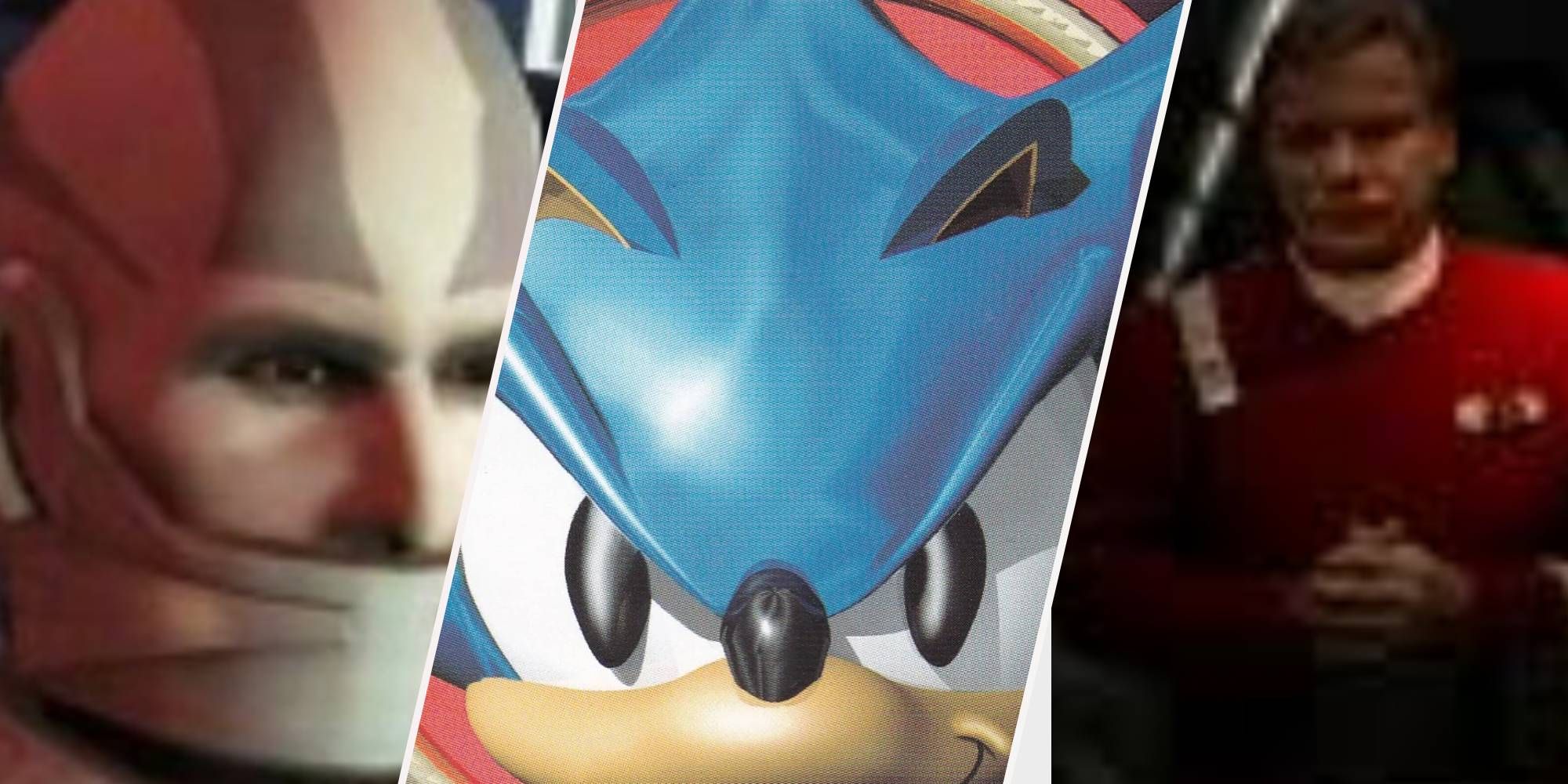 I’ve spoken with my former college professors about this, and they all seem to agree – from our flawed human perspectives, time is a linear thing. I tell them I think.... 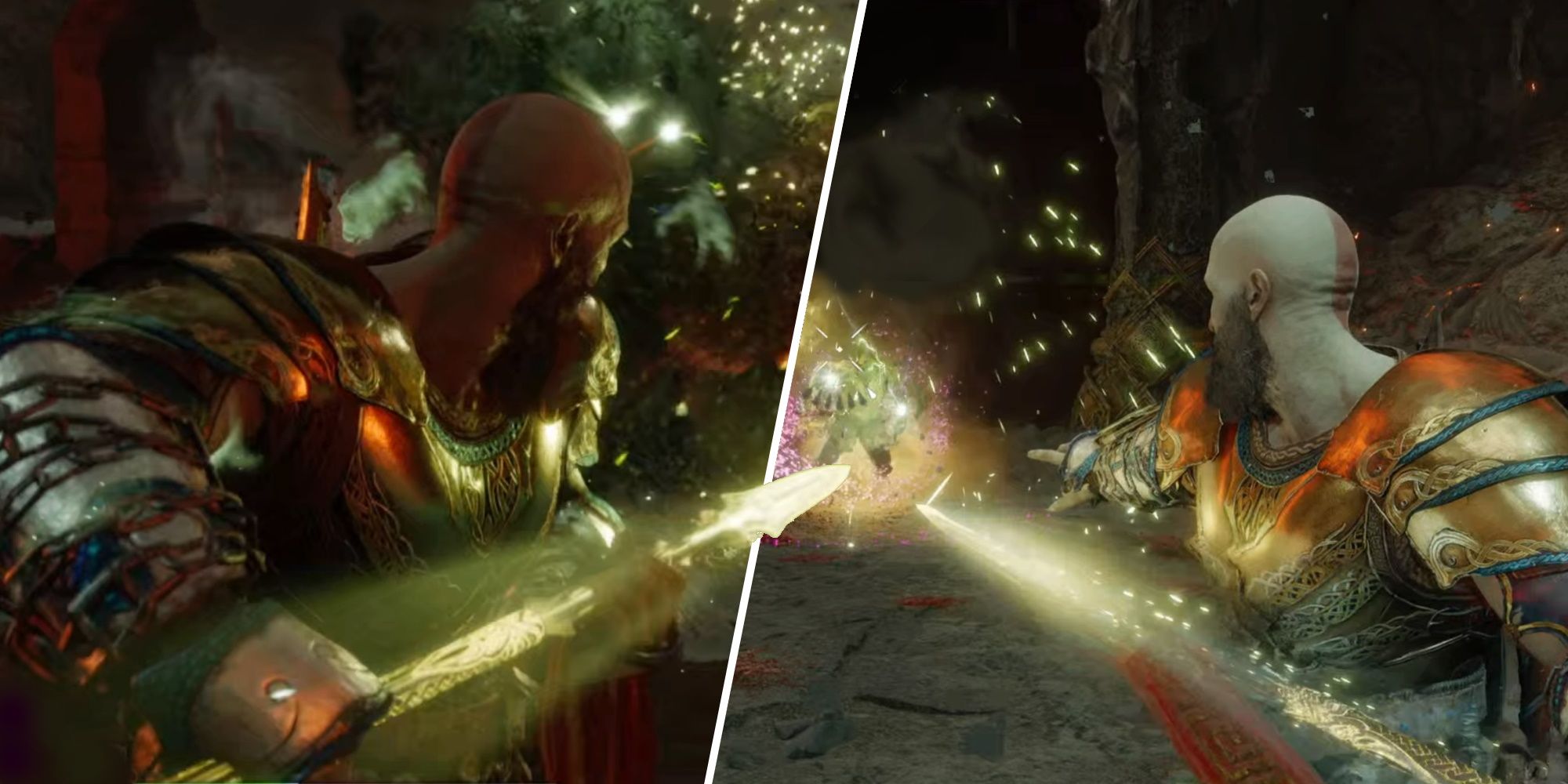 Quick Links Draupnir’s Call And Spear Arsenal God of War Ragnarok‘s final weapon is the mighty Draupnir Spear. This is an extraordinarily powerful weapon when used at range. However, it isn’t....